IAIN
“I didn’t realise at the time that at the end of a day’s walking on the Camino de Santiago, when I was tired but happy, that the thoughts I was writing down would one day be a book. I’m proud that I’ve written this and hope that one day it inspires someone to do something they dream about.” 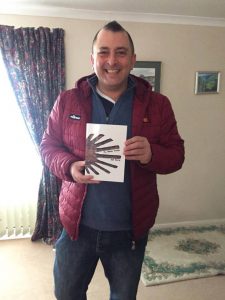 Iain is always ready to promote achievement of groups or individuals be it folk involved in the arts or physical activities like a youngster’s baton Twirlers troupe or championing local girl Rachel Bowie Scotland B team captain.

‘The Camino de Santiago also known by the English name Way of St James is the name of any of the pilgrimage routes, known as pilgrim ways, to the shrine of the apostle St. James the Great in the Cathedral of Santiago de Compostela in Galicia in northwestern Spain, where tradition has it that the remains of the saint are buried. Many take up this route as a form of spiritual path or retreat for their spiritual growth.