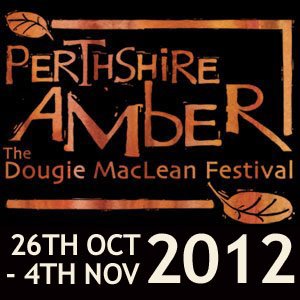 The 8th Perthshire Amber – The Dougie MacLean festival gets underway Friday 26th October at the Edradour Distillery near Pitlochry in Highland Perthshire.

Celtic Music Radio will follow this with live coverage from the Open Mic sessions at the Royal Dunkeld Hotel on Saturday afternoon starting at starting at 1.00pm.

“Dougie MacLean is Scotland’s pre-eminent singer-songwriter and a national musical treasure” (SingOut USA) who has developed a unique blend of lyrical, ‘roots based’ songwriting and and instrumental composition. He has built an international reputation as songwriter, composer and

extraordinary performer which has led to concerts and festivals all over the world including New York’s Carnegie Hall, Glasgow’s Royal Concert Hall and London’s Festival Theatre. Dougie songs

have been covered by hosts of artists, including Paolo Nutini, Amy MacDonald, Ronan Keating, Mary

Black, Frankie Miller and Kathy Mattea. His song Caledonia has become one of Scotland’s most popular contemporary songs and his music has been used in Hollywood films (eg Last of the Mohicans), TV Drama (eg BBC’s A Mug’s Game) and he’s been the subject of three BBC TV music-documentries Dougie has received numerous gold discs for album sales, two prestigious Tartan Clef Awards, a place in the Scottish Music Hall of Fame and an OBE in the New Years Honours list!

During the Perthshire Amber 2012 he will be performing solo, as a duo with Ross Ainslie, a trio with

Ali Ferguson & Chris Agnew  as well as a trio with Greg Lawson and Pete Garnett, with Special

Guest Bruce MacGregor and with lots of musical friends throughout the 10 days!

PAUL JONES OF THE MANFREDS TALKS TO DCR