After eight days of competitions, performances and festivities, the Royal National Mòd says goodbye to current host, Lochaber. Scotland’s biggest Gaelic festival has been hailed a huge success, with a record number of participants leaving a legacy that will be remembered for years to come. Thousands of Gaels and supporters made their way to the festival to enjoy all that the Mòd has to offer, with somewhere in the region of up to £2.5m expected to have been generated for the local economy.

Organised by An Comunn Gàidhealach, the event is the biggest and most important festival of the Gaelic language in the world. This year saw a rise in under 18s competing in traditional singing events and literature events, with at least 200 more entrants than the previous year. The rising interest in the festival and traditional Gaelic culture bodes well for future events and the Mòd’s continued success.

The top prizes this year went to Alasdair MacMhuirich and Rachel Walker in the Gold Medal competition;

In the choir competitions;

Back Choir won the Lorn Shield,

and Bùrach scooped the Sheriff MacMaster.

and the Lovat and Tullibardine was won by Dingwall for the second year running.

“What a fantastic year it’s been for the Royal National Mòd in Lochaber. To welcome the highest number of participants in a decade is special, and shows the strength and importance of Gaelic Culture. The level of competition has been outstanding.

I’m delighted to welcomed so many new faces amongst the familiar ones this year, and we hope they’ll be returning to join us in Dunoon next year. It’s encouraging to see so many young entrants and winners this year, and the quality of competition has been magnificent. I’d like to extend our gratitude to everyone involved in running this year’s Mòd, and particularly to the local organising committee and all of our volunteers and sponsors. Planning is already underway for Mòd 2018 in Dunoon and we look forward to seeing everyone there.”

Councillor Alister Mackinnon, Chair of The Highland Council’s Corporate Resources Committee and Chair Gaelic Strategic Implementation Group said: “The Royal National Mòd in Lochaber has been highly successful. I believe that the Mòd provides a platform for Gaelic and cultural development to the community. The Mòd is hugely important nationally as a means of raising the profile of Gaelic’s role in our heritage. The Lochaber Mòd has proven that Gaelic is a thriving, living, modern language.

“The Mòd is central to Gaelic developments it supports education, broadcasting – including new media, the creative industries and adds greatly to the economy of the area where it is being hosted.

“The numbers of competitors are increasing, and this was evident earlier this week, especially participation from the youth sector. They are our tradition bearers of the future.”

Councillor Mackinnon, continued, “Fort William and the Lochaber area has proven once again that it is an ideal location to host the Mòd. It is also rewarding to see a high percentage of local Lochaber input winning highly credible results in the major competitions.

“On behalf of Highland Council I wish to take this opportunity to congratulate all the competitors, the Local Organising Committee, An Comunn Gàidhealach and all the volunteers for their hard work to ensure that Mòd Lochaber was a huge success.

Paul Bush OBE, Director of Events at Event Scotland said: “We are delighted to see the Royal National Mod enjoy another successful year celebrating Gaelic culture. Lochaber has been the perfect host in 2017, Scotland’s Year of History, Heritage and Archaeology, helping to reaffirm Scotland’s reputation as the perfect stage for events.”

Brian Fulton, CalMac’s Director of Community and Stakeholder Engagement said: “The 2017 Mod in Fort William has been a great success and we congratulate everyone associated with it for putting on such a memorable and enjoyable event. The Mod is a highlight of our year and the 2017 event fully lived up to the very high expectations we had for it.” 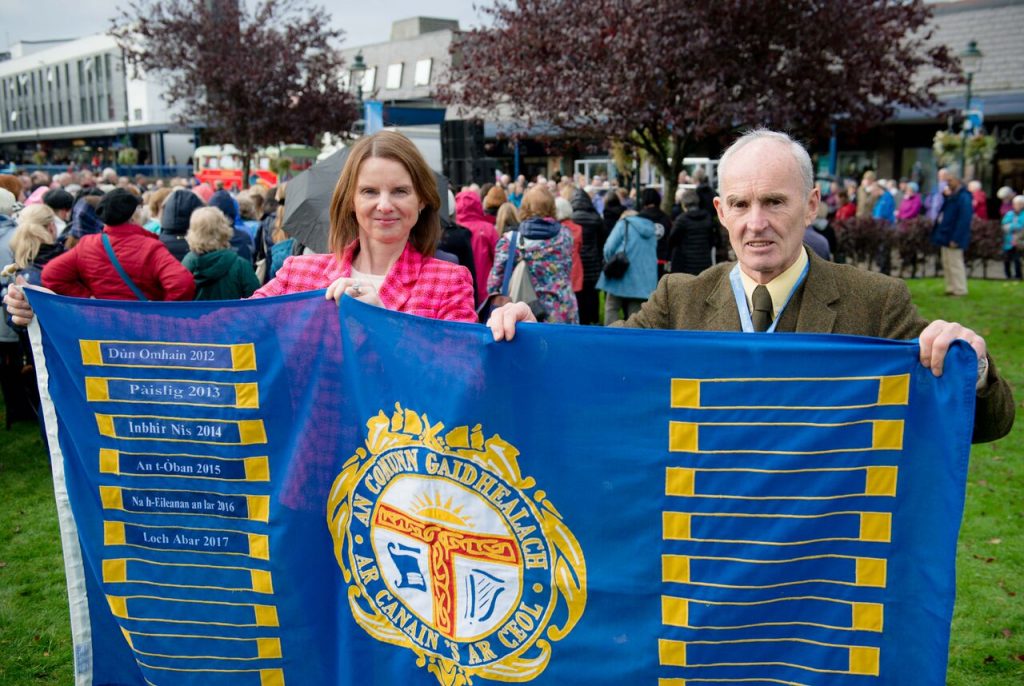