Wednesday  heralds the beginning of the adult competitions at the Royal National Mòd in Dunoon. Commonly known as ‘Literature Day’, competitions including drama, poetry and storytelling will take place throughout the day.  Competitions in singing will also be held in venues across the area, with the coveted Gold Medal and Silver Pendant medals being presented. In both competitions, entrants are required to perform two songs – one prescribed and one of their own choosing. In the prestigious Gold Medal finals in Lochaber last year, Rachel Walker and Alasdair MacMhuirich were triumphant. 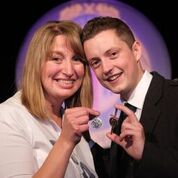 Eileen Duncan of Tongue in Sutherland, whilst Mikie MacEanrig from Keiss, Caithness waked away with the men’s Silver Pendant 2018

Prizes for the drama final and the Gaelic Learner of the Year will also be presented, with Ross Christie, student at Sabhal Mòr Ostaig, crowned last year’s winner. Sponsored by the Royal Highland and Agricultural Society for Scotland, the award acknowledges a Gaelic learner who’s made significant steps to becoming fluent.

This year, the prize is being awarded to Isabelle Flower, and is presented by George Young of the Royal Highland and Agricultural Society of Scotland (RHASS) for the Highlands. Isabelle, known as Izzy, is one of a growing number of students who come to Sabhal Mòr Ostaig from Celtic or Gaelic departments at other universities to take a year out and study Gaelic in an immersive environment. From Dunbar, Izzy has always had a keen interest in languages and studies French and Gaelic at Glasgow University. She was given a place on a course for fluent Gaelic speakers at Sabhal Mòr Ostaig, and quickly established herself as a popular and supportive member of the young Gaelic community on campus.

John Morrison, Chief Executive of An Comunn Gàidhealach, said: “After witnessing some of the fantastic performances throughout the children’s competitions, we’re excited to kickstart the adult contests today.  Special congratulations to Izzy Flower, who epitomises everything the Gaelic Learner of the Year Award celebrates.

“The adult competitions begin with a bang today, with two of the most prestigious awards up for grabs. We’re expecting some incredible performances, and very much look forward to seeing who takes home the Gold Medal and Silver Pendant this year.”

Stewart with a mix of Country music from the Celtic lands plus the Country music gig guide for Scotland. Stewart Fenwick has been broadcasting for 40 years, firstly on his school station, "Radio Lornshill", then on Radio Airthrey at Stirling University, where he ended an eight-year run in 1988 with a 24-hour broadcast. He went on to present "Country Gold" on Central FM in Scotland for 15 years, as well as writing for Country Music & Dance In Scotland, and Country Music & More.