Although the storm that raged over Argyll extinguished the torches of the Torchlight Parade it failed to dampen the Mod spirit of those attending the newly refurbished Dunoon Queens Hall to see The Royal National Mòd (Am Mòd Nàiseanta Rìoghail) swing into action with an energetic night of live music and a whole host of celebrations, as Scotland’s biggest Gaelic cultural festival arrived in Dunoon.

Friday night’s opening ceremony saw performances from talented musicians including traditional groups SIAN and Beinn Lee, while Allan Campbell, President of An Comunn Gàidhealach, gave his president’s address. In his speech, Mr Campbell announced that a very special lecture will be set up to honour the former president, John Macleod, who passed away earlier this year.

Running until Saturday 20th October, the Mòd is set to bring thousands of people to Dunoon as visitors and competitors make their way from across Scotland, the UK, and even Argentina.

Today the main competitions kicked off with young Gaels vying for medals in fiddle, piano, accordion, melodeon and bagpipes.  In the Fringe, a foraging walk also allowed guests to explore the local area and discover Scotland’s natural larder of edible plants, fungi and berries.

Today also saw the main sporting activities as the Mod played host to the very first ever Primary Schools  Mòd Shinty Tournament, which was introduced to celebrate Scotland’s Year of Young People, in which Inveraray beat Kyle and Strachur 1 – 0.

The adults went head to head in the Mòd Shinty Cup, with another victory for Inveraray, beating Coll Glen 6 – 3.

There was also a 9-a-side women’s shinty match between Oban Lorn and Cowal Ladies, with the Oban team coming out on top by 4 goals to 1.

In the Mòd Football Cup, Glasgow Island came through with a 3 – 0 win over local team Dunoon Amateurs, which even involved the Glasgow goalkeeper getting on the scoresheet for one of the goals.

Saturday night welcomed guests from the other side of the world, as Argentinian Gaelic choir Ceòlraidh, stopped by for a very special performance.

Ceòlraidh – Coisir Gàidhlig Ceòlraidh is the only known Gaelic choir in South America, with Argentina having several ties to Scotland and to Gaelic culture. 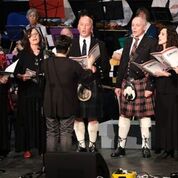